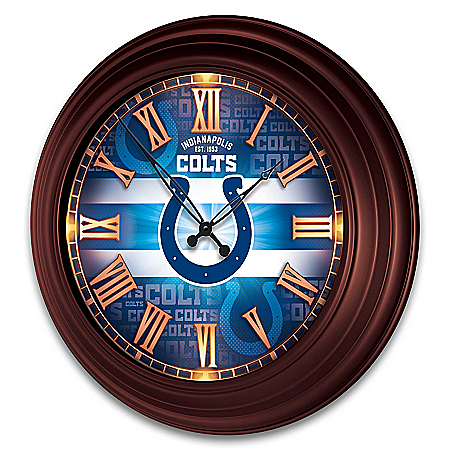 $145 Indianapolis Colts NFL Outdoor Illuminated Atomic Wall Clock Featuring A Glass-Encased Face With Roman Numerals, Team Colors & Logos – The minute the gridiron giants of Indianapolis take to the field, the whole city comes alive with excitement for another thrilling football game. And that excitement continues beyond game day to every day within the homes of all Indianapolis football fans! Now, shine a spotlight on Indianapolis football in your own home with an unfailing, self-setting atomic clock! Introducing the Indianapolis Colts Wall Clock, a first-ever limited-edition atomic clock officially licensed by NFL Properties LLC and available only from The Bradford Exchange.A handsome presentation at over a foot in diameter, this atomic clock is in sync via radio waves with the official source of U.S. time in Fort Collins, Colorado so it is completely self-setting, even during Daylight Saving Time. Plus, a built-in sensor detects night fall, prompting concealed, energy-saving LED lights to automatically illuminate the glass-encased face and Roman numerals. The clock’s housing is skillfully crafted of copper-toned metal for weather resistance, while the team’s official logos and colors stand out against a smart field with the look of jersey texturing on the clock face. It makes a perfect addition to your NFL decor, whether inside or outside! Heavy demand is anticipated, so don’t wait another minute. Order now!