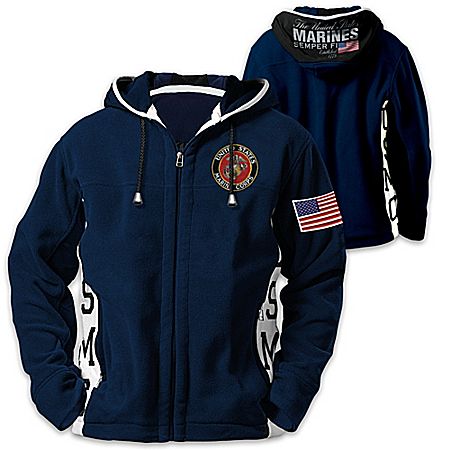 Once a Marine, always a Marine! Pride for the United States Marine Corps stays always and forever. Now, you can show your pride and your respect for the Marine Corps with the handsome, yet comfortable, USMC Semper Fi Men’s Hoodie, a distinctive custom-design hooded fleece jacket, only from The Bradford Exchange.This bold and fashionable USMC hoodie features navy blue fleece and displays meaningful Marine pride artistry. On the back of the black woven hood on this striking hoodie is an American flag graphic and the sentiment, “The United States Marines Semper Fi Established 1775”. On the front of the hoodie, an embroidered round patch of the Marine’s eagle, globe and anchor commands attention. Plus, the off-white side panels are appliqued with USMC in a hip-length while a U.S. flag patch on the sleeve, two vertical zip front pockets and metal toggles on the hood’s cord add extra fashion and comfort. A great way to show your pride for the Marines, but strong demand is expected for this hooded jacket, so order now!