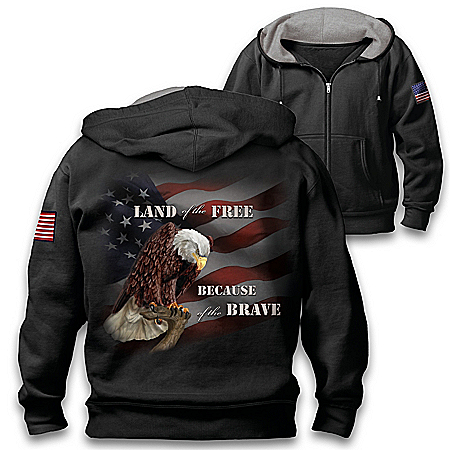 $99.95 Home Of The Brave Men’s Patriotic Full Zip Hoodie Featuring An Eagle Image On The Back & An Embroidered American Flag Patch On The Left Sleeve – God bless America and those who courageously serve to keep it free for all. Now, you can proudly show your respect for those who have made the ultimate sacrifice: putting their life on the line to protect our freedoms. Introducing the Home Of The Brave Men’s Hoodie, a custom design available only from The Bradford Exchange. This handsome full zip hoodie flaunts powerful artistry and embroidered accents that fans of patriotic apparel will salute.The Home Of The Brave Men’s Hoodie is masterfully handcrafted in an easy-care black cotton-blend knit. On the reverse side of this men’s apparel is the striking image of an American eagle in front of the iconic stars and stripes. The eagle bows its head in gratitude for all the brave servicemen and women who defend our nation. The inspiring words, “LAND of the FREE BECAUSE of the BRAVE”, are embroidered and stand out in contrast against the patriotic apparel design to share your appreciation for our active members of the armed forces and military veterans. As a finishing touch, an embroidered American flag patch decorates the left sleeve. Strong demand is expected for this men’s hooded jacket, so don’t miss out; order now!