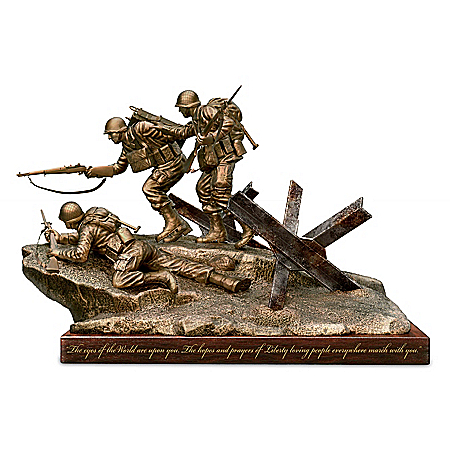 $119.99 General Eisenhower’s words on the eve of what would become the most ambitious seaborne invasion in history proved true. The world held its breath on June 6, 1944, as 160,000 Allied troops braved tides, obstacles and bullets to gain a foothold on the beaches of Normandy, France, turning the tide of World War II and the fate of humanity. Now you can honor that day and those courageous troops with the Historic Landing: D-Day Sculpture, available in a limited edition only from The Bradford Exchange.The dramatic energy of this 12-inch-long cold-cast bronze sculpture captures your attention from any angle while the incredible detail invites you to linger. A gleaming touch of bronze adds the fire of purpose to fine artist’s resin, masterfully hand-cast, hand-textured and hand-painted to convey the moment – from the weathered detailing of the heroes’ gear to the mighty physical and emotional strain of their effort. The “Czech hedgehogs,” which the enemy positioned to deter beach landing, are chillingly picturesque, crafted of solid metal. Along the wooden base, in golden script, a stirring quote from General Eisenhower completes this breathtaking D-Day collectible tribute. Strong demand is expected, so don’t wait. Order now!