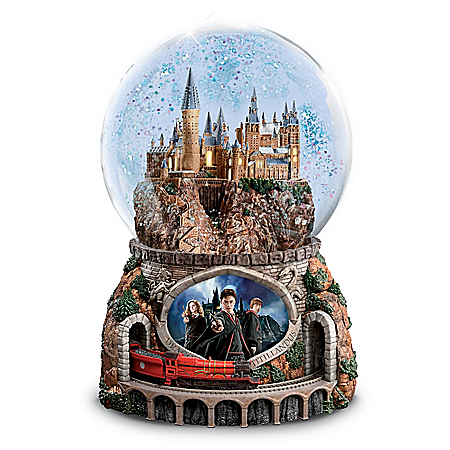 $129.99 Celebrate a spellbinding tale of magic and friendship with a HARRY POTTER™ HOGWARTS™ Express glitter globe inspired by HOGWARTS School of Witchcraft and Wizardry and its iconic trio: HARRY POTTER™, RON WEASLEY™ and HERMIONE GRANGER™. Presenting the Journey to HOGWARTS Glitter Globe, a first-ever limited edition exclusively from The Bradford Exchange. Expertly handcrafted and hand-painted in precise detail, an illuminated sculptural recreation of the school and its landscaping nestles inside this glass HARRY POTTER™ glitter globe.With a gentle shake, a shower of magical glitter swirls around the school inside the glitter globe. The architectural “stone” base includes HOGWARTS™ house symbols: GRYFFINDOR™, HUFFLEPUFF™, RAVENCLAW™ and SLYTHERIN™, along with an image of the three young heroes from the movie. With the flip of the switch, an intricately sculpted, moving HOGWARTS Express circles through the tunnel on the base as the movie melody of “Hedwig’s Theme” plays! Strong demand is expected for this first-ever HARRY POTTER collectible, so don’t delay. Order now!