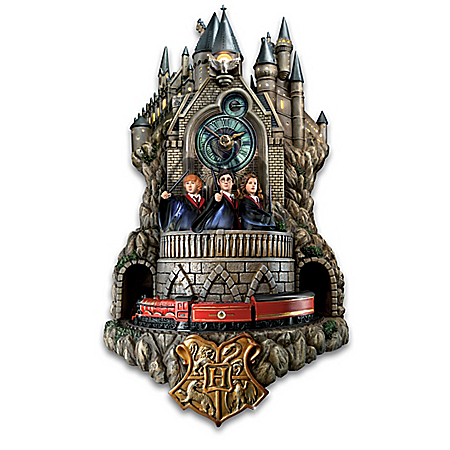 From the moment HAGRID™ utters his famous line, HARRY POTTER™ is drawn into the wonderful Wizarding World, becoming one of its greatest heroes. Now, celebrate the beloved HOGWARTS™ School of Witchcraft and Wizardry with the HARRY POTTER™ HOGWARTS™ Wall Clock, a design exclusive available only from The Bradford Exchange. This officially licensed, fully-sculpted wall clock is a first-of-its-kind you won’t want to miss, featuring lights, music and motion. Every hour on the hour, the HOGWARTS™ Express circles the clock and pulls into HOGSMEADE STATION™ while music from the movie plays!Over a foot tall, this HARRY POTTER™ collectible clock recreates HOGWARTS™ School in vivid three-dimensional detail, complete with the HOGWARTS™ crest celebrating the HUFFLEPUFF™, GRYFFINDOR™, SLYTHERIN™, and RAVENCLAW™ Houses. From the brilliant red of the HOGWARTS™ Express to the detailed features of the heroes, hand-painted elements bring all the adventure of HOGWARTS™ to life. At the flip of a switch, the castle windows illuminate while uplights on the balcony illuminate the characters. Powered by a precision quartz movement, the embellished clock face replicates the famed clock in the HOWARTS™ tower to make sure you’ll always make it to class – or anywhere else – on time. Strong demand is expected for this limited-edition timepiece, so order now!