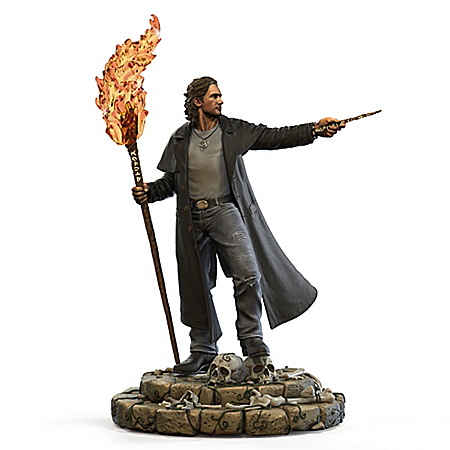 $99.99 As fans of Jim Butcher’s best-selling series, “The Dresden Files” know, Harry Blackstone Copperfield Dresden is always ready to manifest his magical powers against any supernatural forces that come his way in the streets of Chicago. Now, bring this gruff hero home with the Harry Dresden Wizard for Hire Sculpture, a first-ever sculpture of the world’s only wizard private investigator. Available exclusively from The Hamilton Collection, this sculpture is skillfully handcrafted and hand-painted so that no two are alike, making each issue a true one-of-a-kind tribute to this acclaimed urban fantasy series and its wizardly private eye!From the dramatic realism of the detective’s visage to the stone-look base with the bony remains of creatures dead and gone, this officially licensed Harry Dresden collectible sculpture is sure to enchant fans from every fully-dimensional angle. Poised to take on dark forces at an impressive 11-inches high, he holds his “blasting rod” in one hand, used to focus his evocation magic, and his trusty staff in the other. This unique fantasy collectible features runes that glow in the dark and a pure crystalline flame that “burns” with brilliantly infused color! Plus, the P.I.’s jewelry gleams with metallic tones, including his deceased mother’s silver pentacle amulet around his neck and his enchanted bracelet, used to project a physical and magical shield. Strong demand is anticipated for this limited edition, so don’t delay. Order now!