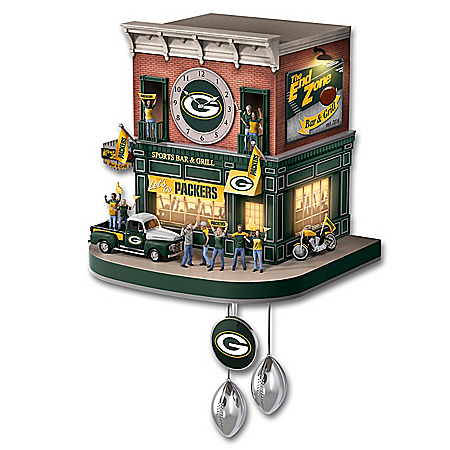 $199.99 There are no more devoted NFL fans than Packers fans, selling out every home game since 1960 with a season ticket waiting list that’s 86,000 names long! Now, this limited-edition Green Bay Packers cuckoo clock captures the spirit of loyal Packer fans every hour, on the hour! Showcasing an original design inspired by devoted fans hanging out in their favorite gathering spot, this officially licensed Green Bay Packers Fan Celebration Cuckoo Clock is available only from The Bradford Exchange. It brings together the ultimate roster of lights, sound and motion to create a truly amazing timepiece for fans.This Green Bay Packers collectible is expertly handcrafted to showcase the details of a hometown bar and grill where Green Bay Packer fans get together to cheer on their team. Complete with hanging pennant flags and an officially authorized team logo on the clock face, this fan-favorite timepiece starts the celebration at the top of each hour. The building’s windows and billboard light up and fans “run” out onto the balconies to cheer on their historic team! Plus, your NFL collectible clock features a logo pendulum, hanging football weights and precision quartz movement, making it as reliable as your favorite team. Strong demand is expected, so don’t delay. Order now!