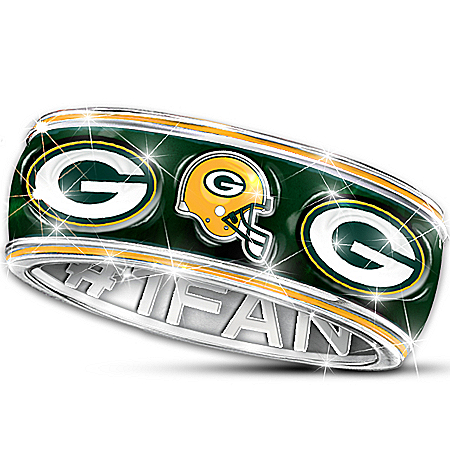 $119.99 Here’s a unique way to show you’re a “#1 Fan” of the Green Bay Packers, the team with more league championships than any other team in the NFL, including their 2011 Super Bowl victory! Now this Green Bay Packers spinning ring, officially licensed by NFL Properties, gives Packer fans a new way to assert their bragging rights to the championship. This first-of-its-kind Green Bay Packers ring is a fine jewelry exclusive from The Bradford Exchange – perfect for wear by both men and women. It allows any Green Bay fan to score some serious style points while celebrating The Pack’s Super Bowl XLV victory and their unmatched championship legacy.This contemporary Green Bay Packers spinning ring pays a special tribute to your champions, handcrafted of solid sterling silver. It features a Packers helmet and official Green Bay Packers logos on a field of team green enameling trimmed in rich gold enamel and silver. And the center of the band spins, revealing the Packers team name as you turn the ring! Plus, the interior band features a cutout that spells out “#1 Fan”, another symbol of your true Packers devotion. For men or women, this Green Bay Packers spinning ring makes a great personal fan statement or a terrific Packers fan gift. But since demand is likely to be high for this unique NFL-licensed Packers jewelry, don’t wait. Order now!