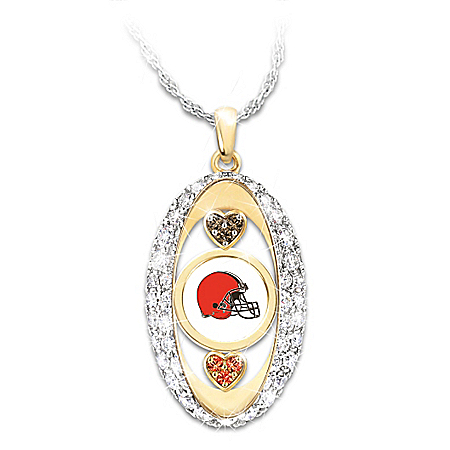 $99.99 It’s no secret, Cleveland Browns fans’ loyalty runs deep. In fact, they’re considered the most loyal fans in the NFL. Whether sitting in the Dawg Pound at the game or in front of their televisions at home, they continue to show their undying support season after football season, clad in their orange and brown. Now you can show your devotion and love for the Cleveland Browns with a pendant necklace that sparkles with team pride: the For the Love of the Game Browns Pendant Necklace, a fine jewelry design exclusively from The Bradford Exchange. Officially licensed by NFL Properties, LLC, this handcrafted oval pendant necklace features a glittering pave of over 30 genuine Swarovski® crystals!At the center of this NFL pendant is the Browns official logo in bold team-colored enameling, accented by two hearts, each sparkling with 3 more team-color Swarovski crystals. For the appropriate finishing touch, the reverse side of this Cleveland Browns pendant is engraved with “Browns Pride”. As a winning Cleveland fan gift or personal keepsake, this fabulous pendant necklace is a glittering symbol of stylish devotion that any fan will be proud to wear! Strong demand is expected so don’t delay. Order now!