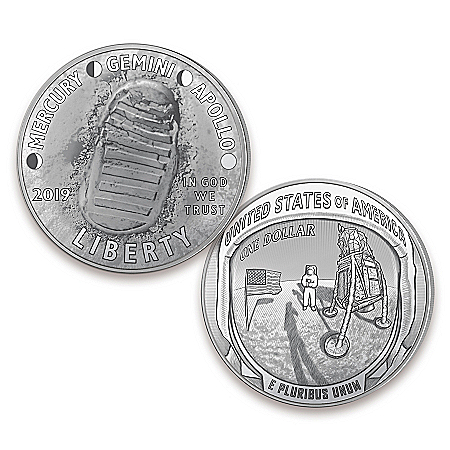 $199 First Strike 50th Anniversary Of Apollo 11 Moon Landing Legal Tender Silver Dollar Coin With Unique 3-D Curve Shape – On July 21st, 1969, Americans huddled around their TV sets to view a grainy, low-quality, but very special live broadcast. In all, it’s estimated that 530 million people around the world watched as astronaut Neil Armstrong set foot on the moon’s surface. Now, commemorating the 50th anniversary of the Apollo 11 moon landing, a very special silver coin has been minted. And you can own a prestigious “First Strike” issue with an exclusive collector’s presentation from The Bradford Exchange Mint: the First Strike Apollo 11 Silver Dollar Coin. Beautifully showcasing this first-ever 99.9% silver curved coin, it is the perfect tribute to one of mankind’s greatest achievements!Minted at the Philadelphia Mint in 1-ounce 99.9% pure silver, this legal tender silver dollar coin has been granted the official “First Strike” designation by the prestigious PCGS (Professional Coin Grading Service). That means it was made within the first 30 days of issue when the coining dies were at their most pristine. The distinctive convex reverse design depicts the Apollo 11 lunar module, Neil Armstrong and the American flag, while the concave obverse side features Buzz Aldrin’s boot print in the lunar soil. Your coin arrives in a special PCGS holder with authentication and a holographic seal for enduring protection, along with a custom mahogany-finished deluxe display box. You’re sure to enjoy showing off this remarkable treasure or give as an impressive patriotic gift; there are only 999 available with this exclusive collectorâ€™s presentation so don’t miss your chance. Order now!