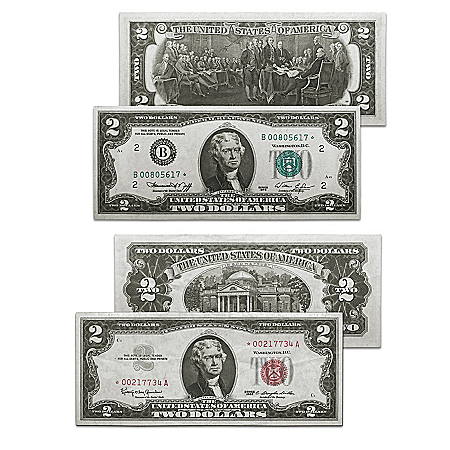 $199 The 1976 First Issue And 1963 Last Issue $2 Star Note Legal Tender Currency Set With Deluxe Display Box – Prized by collectors, $2 Bills make up less than 1% of all currency produced today. Yet a special type of $2 Bill, known as a Star Note, is even more sought after, especially when it is the coveted first or last in its series. Now, a pair of these historic Two-Dollar Bills can be yours in The First and Last $2 Star Note Currency Set, available in an exclusive presentation from The Bradford Exchange Mint. Star Notes bear a star symbol to the left or right of the serial number to indicate that it is a replacement for misprinted or damaged currency, which makes these notes truly rare considering today’s advanced production processes. This legal tender currency set includes a 1976 First Issue and 1963 Last Issue, both in very desirable About Uncirculated condition, ensuring it will be a prized acquisition for collectors.Your 1976 First Issue is a Green Seal $2 Federal Reserve Star Note, released to celebrate America’s Bicentennial, and features a green treasury seal, green star and John Trumbull’s famous painting, “The Declaration of Independence,” recreated on the reverse. Your 1963 Last Issue is a Red Seal $2 United States Star Note and features a red treasury seal to the right of Thomas Jefferson’s portrait, a red star and Jefferson’s home, Monticello, on the reverse. This rare opportunity lets you show off both notes, displayed safely within crystal-clear currency sleeves and arriving with a museum-quality, mahogany-finished Deluxe Display Box. A must-have for collectors, history buffs and currency and coin enthusiasts, this heirloom classic Two-Dollar Bills set also makes an impressive patriotic gift. Strong demand is expected, so don’t delay. Order now!