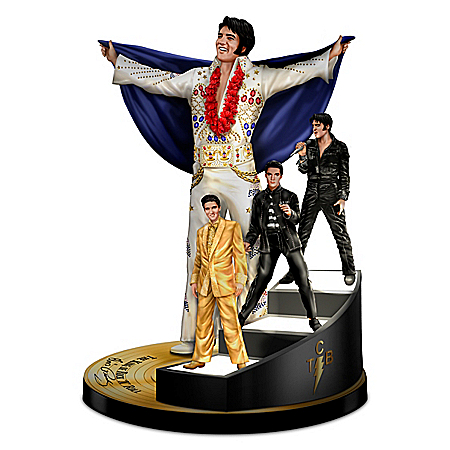 $149.95 Evolution Of An American Icon Hand-Painted Elvis Presley Sculpture With A Lighted Staircase & Adorned With Swarovski Crystals – Commemorate one of America’s most legendary superstars – Elvis Presley! Take a stroll down memory lane to relive four of his most iconic looks and performances, all exhibited in one extraordinary work of art. Pay tribute to Elvis’s grand stage presence and timeless career with this striking Evolution Of An American Icon Sculpture, available in a limited edition only from The Hamilton Collection. Capture the King of Rock & Roll™ in his most unforgettable appearances in both movies and film to truly honor the audacious charisma of Elvis Presley.Impeccably handcrafted and hand-painted, this officially licensed Elvis Presley sculpture showcases four of his most recognizable costumes. Simply flip a switch to illuminate the stairs highlighting Elvis’s journey. Eight hand-set, genuine Swarovski crystals accent his shimmering Hawaiian inspired suit that stands the tallest. Admire the glistening metallic paint used to craft his memorable, dazzling gold suit ensemble. Each of the four sensational outfits celebrate a time when the late Elvis Presley proved he was one of the greatest stars of the 20th century and would not be forgotten. Accented with a golden touch, the eye-catching base features a stunning inscription of his honorary “The King Of Rock ‘N’ Roll” title and “signature.” Long-time fans will revel at the opportunity to feature this unique Elvis Presley decor in their own home as an homage to rock and roll history. Demand is expected to be high, so don’t delay; order now!