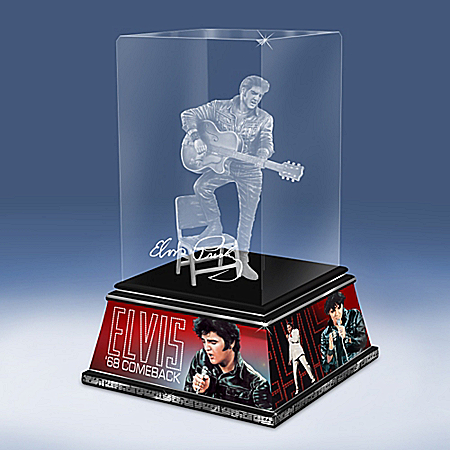 After a string of movie extravaganzas, Elvis Presley longed to be back in front of a live audience. That’s when his manager negotiated a television deal that would give NBC its biggest ratings victory of the year, “Elvis: ’68 Comeback Special!” Now, you can celebrate this monumental moment with the first-ever Elvis™ Rock and Roll Legend Glass Sculpture, exclusively from The Hamilton Collection. This stunning collectible showcases a precision-etched replica of Elvis’s signature!This Comeback Special sculpture features a solid glass block laser-etched with over one million precise laser points to create a 3D image of the King of Rock and Roll in a pose inspired by his “’68 Comeback Special.” From all angles you can see every detail in radiant, crystal-clear clarity, from the strings of Elvis’s guitar and the creases in his “leather” outfit to the casual chair he rests his foot on and his smoldering good looks. Plus, the base of this striking collectible is emblazoned with colorful artistry of the King during his television special. Strong demand is expected, so order now!