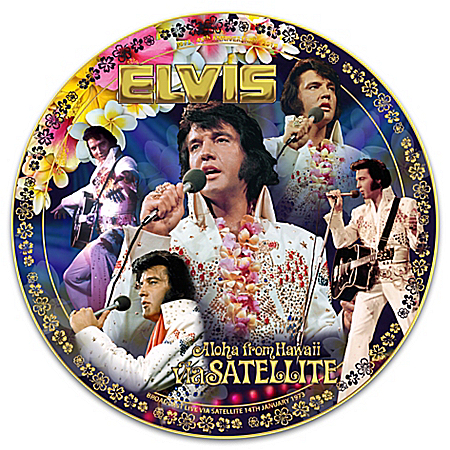 A worldwide TV audience of over one billion followed Elvis’ every move on January 14, 1973 when the King of Rock ‘n’ Roll™ rocked the world at his “Aloha from Hawaii” concert. Considered one of the greatest televised concerts of all time, this landmark event forever holds a special place in the hearts of Elvis fans. Now, honor the 45th anniversary of the concert with this officially licensed Elvis™ Aloha From Hawaii Collector Plate, available exclusively from The Bradford Exchange in an edition limited to just 2,018 worldwide. This Elvis Presley collectible is the perfect tribute to the greatest entertainer of all time!Grandly sized at 12 inches in diameter, this extraordinary Heirloom Porcelain® collector plate is finely crafted and showcases five archival images of Elvis during his legendary televised concert, each image exquisitely recreated in vivid color and detail. A gleaming 22K gold rim hugs this special plate while more 22K gold adorns the concert album-inspired lettering and floral border. A custom-crafted, satin-lined Deluxe Presentation Case is included, perfect for storage or gift-giving. Intense demand is expected for this must-have Heirloom Porcelain plate, so do not delay. Order now!