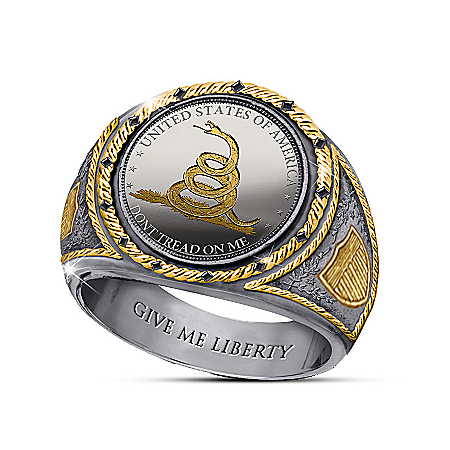 $159.99 Before we adopted the Stars and Stripes, Revolutionary War America showed its defiance and independence with the Gadsden Flag, emblazoned with a coiled rattlesnake (found in all 13 colonies) and the warning “Don’t Tread On Me.” Now, this handsome silver proof ring captures the patriotic spirit of that iconic flag in a fine jewelry exclusive from The Bradford Exchange Mint. The historic design of the Don’t Tread On Me Ring features a custom-crafted coin centerpiece of 99.9% pure silver that boldly showcases the iconic Gadsden Flag rattlesnake design in all its glory, making a truly revolutionary statement of patriotic pride.This masterfully handcrafted men’s ring features gleaming 24K gold-plated accents on the central rattlesnake image, the intricate centerpiece border, and on both sides. The sides of the ring are also enhanced with 24K gold-plated Union shields for an attractive touch. The border around the centerpiece also features 13 black enamel accents (symbolic of the 13 colonies) while the inside of the band is engraved with “GIVE ME LIBERTY,” creating the ultimate United States of America ring. Strong demand is anticipated for this Don’t Tread On Me Ring, so don’t delay. Order now!