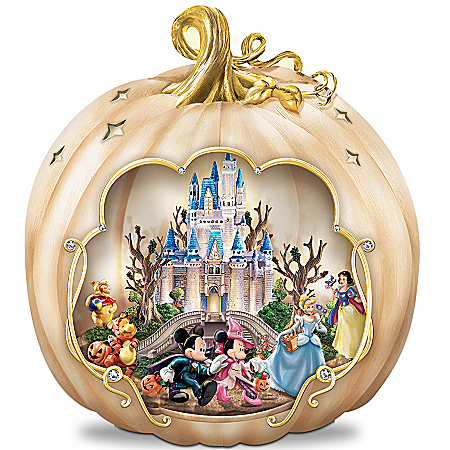 There’s nothing as inspiring as Disney’s delightful tales and no time like Halloween to indulge in the magic. Now, you can let your imagination run wild with this illuminated Disney pumpkin tabletop centerpiece, a sculptural masterpiece from The Bradford Exchange, issued in a limited edition of 120 casting days.Handcrafted of artist’s resin and meticulously hand-painted to bring you intricate details, this Disney Halloween decoration features a fully sculpted interior with six Disney characters decked out in Halloween costumes as they trick-or-treat around Cinderella’s castle. Pearlized finishes, golden filigree, glittering simulated jewels and gold-toned stem add more delight. Plus, with the flip of a switch, the pumpkin and castle light up from within and the characters rotate around the castle! Strong demand is expected, so order now! A fine collectible, not intended for children. $149.99