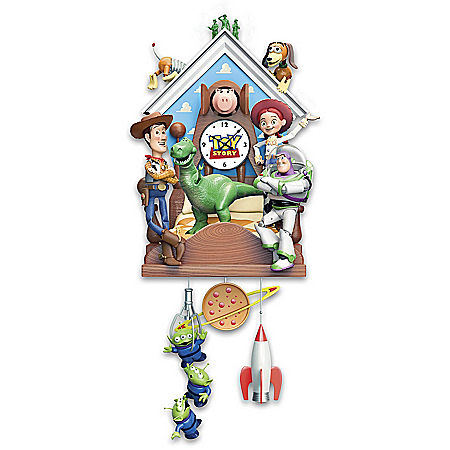 Andy’s toys are always ready for their next adventure – as long as nobody is looking! Now, bring these unforgettable characters home with the Disney·Pixar Toy Story Cuckoo Clock, licensed from Disney and available from The Bradford Exchange. Featuring a precision timepiece with accurate quartz movement, this sculptural cuckoo clock is superbly handcrafted with amazing detail to capture the toys in Andy’s room. It’s the perfect way to celebrate Disney·Pixar’s “Toy Story” every minute!Every beloved character is intricately sculpted and hand-painted to perfectly capture their look and personality, from Woody and Buzz to Rex, Slinky Dog, Jessie and more. Measuring over 1-1/2 feet high, this cuckoo clock plays music on the hour as Hamm pops out of the doors above the clock face. Complete with a Pizza Planet pendulum flanked by three Little Green Men and a rocket ship as hanging weights, it’s truly an unforgettable addition to your Disney home decor. It is available in a limited edition of 295 casting days, and strong demand is expected, so don’t wait! Order now!This fine home decor is not intended for children.