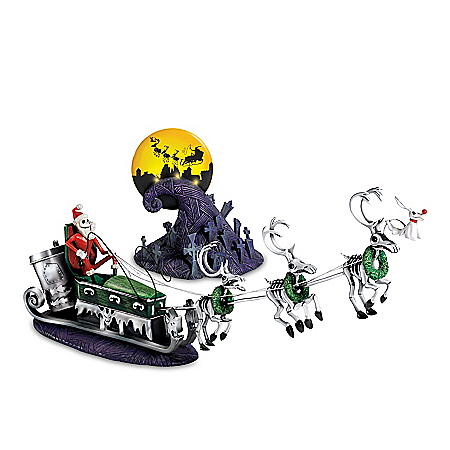 It’s been a quarter century since the Pumpkin King became Sandy Claws to bring his own twisted version of Christmas to the world. Now you can celebrate 25 years of Disney’s critically acclaimed movie milestone with The Nightmare Before Christmas Sculpture Set, licensed from Disney and available in a limited edition of 2,500 worldwide from The Bradford Exchange, Hawthorne Village Division. A stunning Disney collectible, this sculpture set is an extraordinary Silver Anniversary tribute that lights up and plays music!This frighteningly charming handcrafted, hand-painted two piece display is packed with spooktacular features! The first piece is an impressively sized sleigh measuring a foot and a half long and impeccable in its accuracy. The entire scene is a marvel in design, with the Master of Fright’s “skeleteam” of reindeer, led by Zero, suspended in flight! Plus, befitting its Silver Anniversary, the sleigh is lavished with hand-applied accents of silver metallic paint while the “skeleteam” of reindeer are all individually painted by hand in gleaming silver! The second piece is a musical sculpture of the iconic moon over Cemetery Hill, featuring a silhouetted sleigh image over the skyline of Christmas Town on a full moon. At the touch of a switch, the moonscape illuminates while a medley of eerie music direct from the film’s original soundtrack plays. Strong demand is expected for this illuminated sculpture set, so don’t delay, order now!Fine collectibles, not intended for children under 14. $199.99