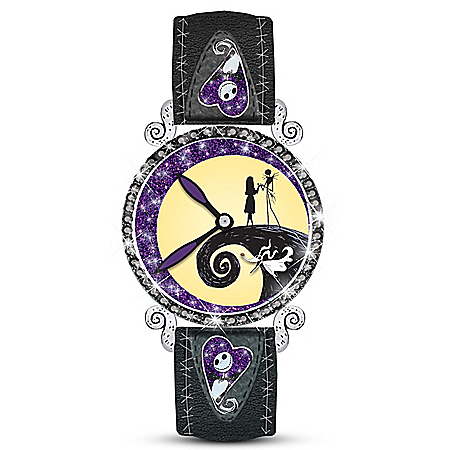 Captured side by side atop Spiral Hill, against the eerie backdrop of a moon, Jack Skellington and Sally from Disney Tim Burton’s “The Nightmare Before Christmas” cast an enchanting spell with their eternal love. Now, celebrate this creepy couple and a movie classic with the Disney Tim Burton’s Nightmare Before Christmas Midnight Magic Women’s Watch, available from The Bradford Exchange. This glow-in-the-dark watch is a ghoulishly gorgeous timepiece for anyone who loves the twisted classic.Custom-designed, this stylish watch features a portrait of Jack and Sally on Spiral Hill silhouetted against a full moon, framed by shimmering purple accents. Hold the watch up to a light source, and the moon will glow in the dark to capture the spooky spirit of this iconic moment. Ghost dog Zero “flies” around Jack and Sally on the watch face as black crystals set around the bezel add to the stylish fun. The adjustable black leather strap features enameled heart-shaped grommets of Jack Skellington on either side of the watch face. Powered by precision quartz movement, this Disney jewelry is a spook-tacular celebration of a frightfully delightful classic. Strong demand is expected, so don’t delay. Order now!This fine jewelry is intended for adults. $119