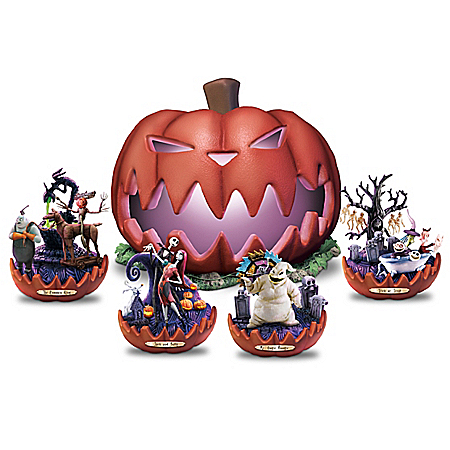 For over 20 years, Jack Skellington and the rest of his ghoulish companions from Halloween Town have been scaring us in the frightfully delightful movie classic, “Disney Tim Burton’s The Nightmare Before Christmas.” Now the movie’s spectacular spookiness is yours to enjoy any time in the Nightmare Before Christmas Pumpkin King Sculpture Collection! Licensed from Disney and available from The Bradford Exchange, Hawthorne Village Division, this exciting collection arrives in sets of two scene sculptures, starting with Issue One, The Pumpkin King and Jack and Sally. Next to arrive will be Issue Two, Mr. Oogie Boogie and Trick or Treat. Soon your collection will continue with Issue Three, the illuminated Pumpkin King’s Pumpkin centerpiece, followed by additional collectible sets of two Nightmare Before Christmas sculptures, each set a separate issue to follow.‡Each fabulously detailed scene in this sculpture collection brings the denizens of Halloween Town to gloriously nightmarish life! Individually handcrafted in artist’s resin and meticulously hand-painted, they cleverly recreate every devilish detail of your favorite characters. But the biggest fright is Issue Three, the Pumpkin King’s Pumpkin! The centerpiece of this ghoulish Nightmare Before Christmas collection, it is grandly sized, wickedly grinning and eerily illuminated with changing colors of purple, green and orange that bring out the ghastly charms of all your sculptures. Plus, at the flip of a switch, it fills the air with spellbinding music directly from the movie soundtrack. Best of all, it’s yours for the same low price as each set of two sculptures! Strong demand is expected from Disney collectible enthusiasts and devoted Nightmare Before Christmas fans alike, so don’t wait. Order now!Fine collectibles, not intended for children. $59.99