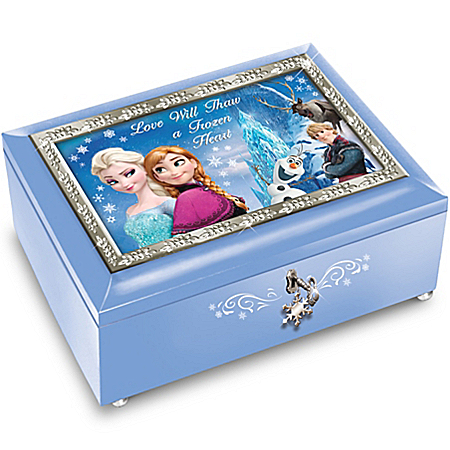 All the excitement and magic that made Disney’s “Frozen” one of the biggest animated movies of all time is now yours to enjoy in an enchanting new way. Introducing our Disney FROZEN Music Box, licensed from Disney and available from The Bradford Exchange. Celebrating the characters, message and music from the movie “Frozen”, this Disney treasure plays the melody of “Let It Go” and showcases colorful movie artwork on the lid. It’s an heirloom-quality collectible and an unforgettable gift!Handcrafted and elegantly lined in black velvet, this exquisite collectible Disney FROZEN Music Box showcases a montage of favorite characters on the lid, including Elsa the Snow Queen and princess Anna, lovable Olaf, courageous Kristoff and his loyal companion Sven. A gleaming frame surrounds the artwork, which features the touching message of the movie, “Love Will Thaw a Frozen Heart.” This wintry blue music box rests on silvery ball feet and features a decorative silver-plated key and dangling snowflake charm on the front. A flurry of demand is anticipated and the edition is limited to 295 crafting days, so don’t delay. Order now! A fine collectible, not intended for children. $59.99