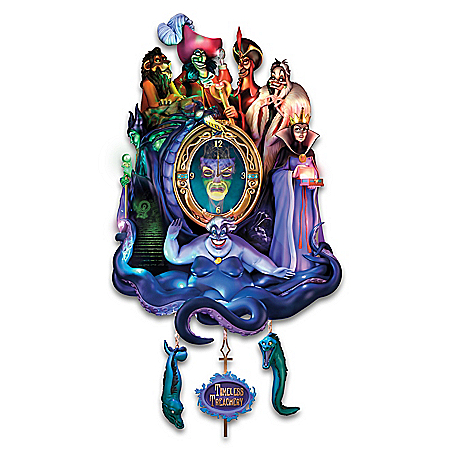 $219.99 Everyone knows bad guys have all the fun, but you’ll have more than your fair share with this ultimate tribute to the Disney Villains who are oh-so-good at being oh-so-bad. Introducing the Disney Timeless Treachery Cuckoo Clock, an extraordinary collector must-have that is licensed from Disney and available from The Bradford Exchange. Handcrafted by master artisans, this classic Disney Villains cuckoo clock is a hand-painted sculptural triumph that captures the villainy of Maleficent, Scar, Captain Hook, Jafar, Cruella, the Queen and Ursula. Maleficent even appears in her dragon form as she wraps around the clock face. And Ursula’s sinister eels tag along as decorative weights! Best of all, the whole scene comes to life with light and music at the top of each hour.Making the most dramatic appearance at the heart of the clock, you’ll discover a working clock face shaped like the Queen’s Magic Mirror. On the hour, Magic Mirror’s green face slowly appears in the real glass as light is cast on each character’s true nature with 4 different colors of LED lights. You’ll also discover added glowing touches on both Maleficent and Jafar’s staffs, as well as the dragon’s eyes. For the ultimate insider touch, a red glow shines from inside the Queen’s heart box. Adding the final bit of atmospheric wickedness, this illuminated cuckoo clock plays villainous soundtrack music at the top of the hour. A terrific find for any fan of Disney Villains, this Disney collectible cuckoo clock is issued in a limited edition of 295 crafting days and strong demand is expected, so don’t wait. Order now!This fine home decor is not intended for children.