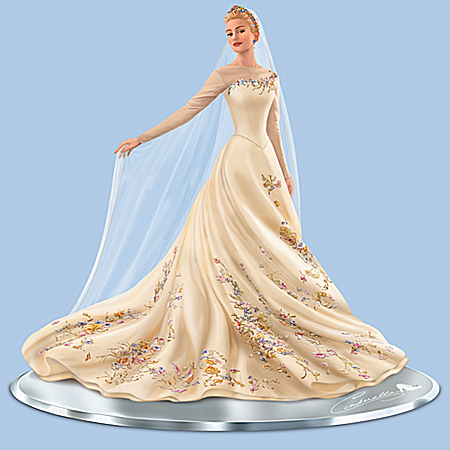 Guided by her mother’s words to always “have courage…and be kind” and with a bit of magic from her Fairy Godmother, young Cinderella went from poor servant girl to become the royal bride of her dreams! Now, you can celebrate your own happily ever after with a wedding gown fit for a princess in the Disney Cinderella Wedding Gown Figurine, inspired by Cinderella and the gown she wears in Disney’s beloved film, available from The Hamilton Collection.Officially licensed from Disney, master artisans craft the Disney Cinderella Wedding Gown Figurine entirely by hand. From the sheer, lace-like look of Cinderella’s sleeves and neckline to her full-length veil that’s crafted from organza fabric with finished trim, the famous movie gown comes elegantly to life. Upon her pearlescent gown (hand-painted to look just like silk), delicately raised floral patterns add a luxurious touch. And most dazzling of all, this Cinderella figurine wears a golden princess tiara shimmering with genuine Swarovski├é┬« crystals. A mirrored base, complete with logo from Disney’s “Cinderella”, makes your breathtaking bridal figurine shine even brighter. This Disney figurine is strictly limited to 95 casting days, and strong demand is expected. Order now! A fine collectible, not intended for children $99.99