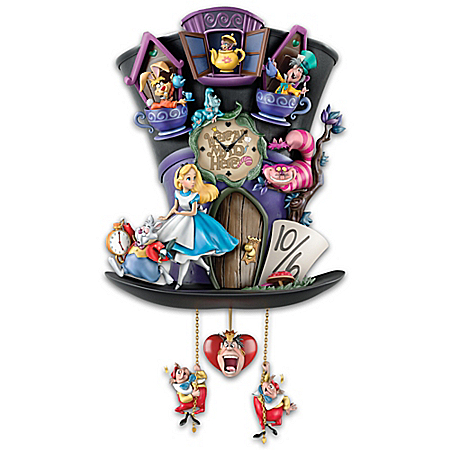 $219.99 Take a look around – we’re all mad here! Now, celebrate the topsy-turvy world of Disney “Alice in Wonderland” every minute with the Disney Alice in Wonderland Mad Hatter Cuckoo Clock, licensed from Disney and available from The Bradford Exchange. This fully sculpted Disney Alice in Wonderland cuckoo clock is handcrafted in the shape of the Mad Hatter’s hat and features beloved characters from the film including Alice, White Rabbit, Cheshire Cat, March Hare, Caterpillar and more!At a stunning 22-inches high, this Disney Alice in Wonderland clock features “We’re All Mad Here” on the clock face and hidden LEDs in the hat brim provide fantastical uplighting to illuminate glow-in-the-dark details, so madness can reign all the time! For added enchantment, Mouse in a Teapot emerges every hour as the cuckoo, the Queen of Hearts enlivens the pendulum, and Tweedle Dee and Tweedle Dum make mischief in the role of decorative weights. It is issued in a limited edition of 295 crafting days and strong demand is expected, so don’t wait. Order now!This fine home decor is not intended for children.