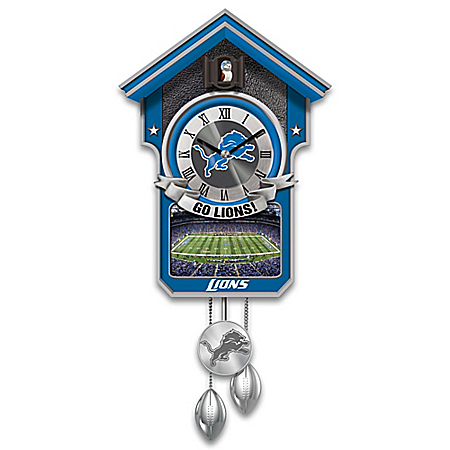 If you want to hear a lion roar, just go to a Detroit Lions home game and the fans will show you how it’s done. Now it’s time to bring that Lions spirit home with this Detroit Lions Cuckoo Clock, exclusively from The Bradford. Officially licensed by NFL Properties LLC, this bold Lions wall clock is available in an edition strictly limited to 10,000 worldwide, and sure to become the focal point of every game day get-together. Your collectible clock is individually handcrafted and hand-painted in the Lions’ blue and silver displaying Lions team pride for all to see.Powered by a precision quartz movement and loaded with tributes to the team, this Lions wall clock features the classic blue Lions’ logo on the face, as well as the text logo at the bottom and a “Go Lions!” banner in between. A vivid color image of the field surrounded by fans on game day is just below the clock face, and is highlighted by a swinging pendulum with the official Detroit Lions logo and football-shaped weights. At the top of every hour, a traditional cuckoo bird wearing a Lions helmet pops out of the miniature doors at the top of the clock and roars – er, chirps – to cheer on the team! You’re sure to love showing off this exciting treasure, and it makes an outstanding Detroit Lions fan gift, but intense demand is expected. Don’t fumble. Order now!