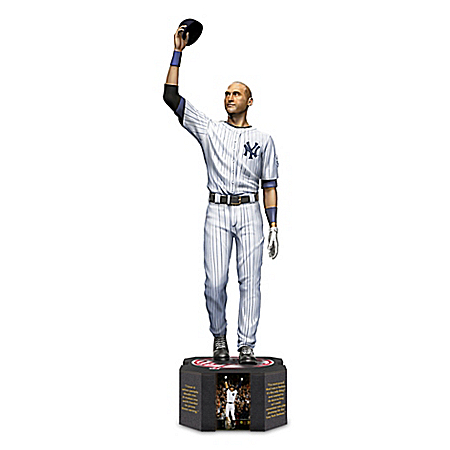 $99.99 New York Yankees Derek Jeter MLB Tribute Sculpture Featuring A Pedestal Base With Archival Photos & Quotes From The Hall Of Fame Slugger – Throughout his career with the Yankees™, shortstop Derek Jeter helped his team win five World Series™ titles and further a winning dynasty he captained for twelve seasons. Now this collectible Derek Jeter Sculpture pays a striking homage to the National Baseball Hall of Fame inductee in a limited edition from The Hamilton Collection. Officially licensed by Major League Baseball™, this fully sculpted likeness of Derek Jeter captures one of the game’s greatest stars in a moment of honor as he extends thanks to loyal fans of the New York Yankees™.Standing an impressive 13 inches tall, this MLB™ collectible sculpture is expertly handcrafted from top to bottom for a museum-quality tribute. The Hall of Fame shortstop stands atop a four-sided, granite-look pedestal base emblazoned with brilliant photos of Derek Jeter in action and personal quotes from the famed ballplayer. Plus, the base is crowned with the iconic Yankees logo for a winning touch. Strong demand is expected for this collectible Derek Jeter portrait sculpture and it makes a great Yankees gift for a fellow fan, so don’t wait. Order now!