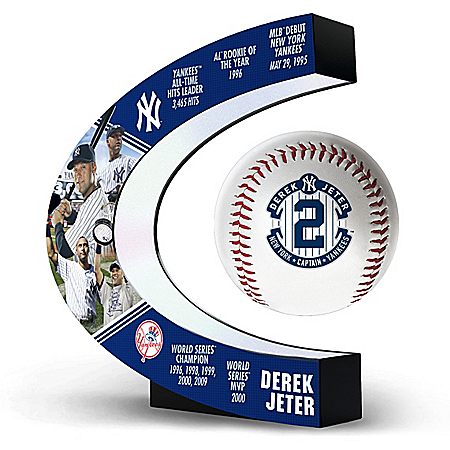 $109.99 New York Yankees Derek Jeter Levitating MLB Baseball Has Images Of The Captain” & Career Stats With An Illuminated Base – One of the greatest Yankees™ to ever play the game, Derek Jeter is a baseball legend. Ever since his MLB™ debut in 1995, Jeter has impressed fans with his talent, drive, and dedication to the game. Now his many accomplishments – including being the Yankees All-Time Hits Leader with 3,465 hits and a five-time World Series™ Champion – inspire this thrilling new tribute: a levitating baseball that floats and spins in mid-air. Introducing the Derek Jeter Levitating Baseball Sculpture, available from The Bradford Exchange.Officially licensed by Major League Baseball™, this leather-wrapped baseball is regulation sized and features Derek Jeters official retirement logo with his jersey number. Plus, electro magnets hidden inside suspend the Derek Jeter ball within the custom base. The light-up base features full-color imagery of The Captain, stats from his outstanding shortstop career, and iconic New York Yankees™ logos. This must-have MLB collectible tribute is sure to stir up intense demand and it is available in an edition limited to 10,000 so don’t delay. Order now!