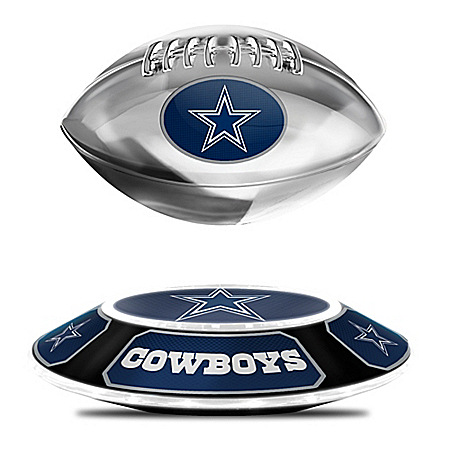 $199.99 The Dallas Cowboys exciting plays, breathtaking passes and triumphant wins draw fans to the game week after week and season after season. Now you can catch a winning tribute to their legacy with the Dallas Cowboys Levitating Football Sculpture, a first-of-its-kind NFL collectible available only from The Bradford Exchange. Officially licensed by NFL Properties LLC, this limited-edition collectible features a gleaming silvery football that hovers and spins in mid-air, capturing the riveting excitement of Dallas Cowboys football.Superbly crafted to showcase the thrilling energy and athletic prowess for which the Cowboys are known, this commemorative collectible is unique because of its innovative use of hidden electro magnets that power the levitation. The handsome base is a bold expression of pride with dramatic Cowboys team colors and logos, while the football suspended above is emblazoned with a complementing Cowboys star logo. Then, at the flip of a switch, white lights shine up onto the football for a dramatic effect. Strong demand is anticipated for this Cowboys tribute, so don’t wait; it also makes an impressive Dallas Cowboys fan gift. Order now!