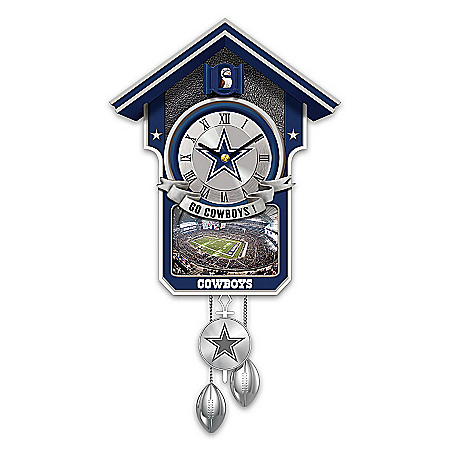 $199.95 Time and again, the Dallas Cowboys have emerged triumphant on the playing field. Now, this Dallas Cowboys Cuckoo Clock lets you demonstrate your team pride any time of day. Officially licensed by NFL Properties LLC and available only from The Bradford Exchange, this handsome NFL cuckoo clock is the perfect way to show your respect for the team’s impressive five Lombardi trophies and Super Bowl Championships.This Dallas Cowboys Cuckoo Clock boasts a handcrafted body enhanced with bold hand-painted blue and silver details. A vivid, full-color image of the Cowboys’ iconic playing field adds game-day excitement, highlighted by the team name just below. A precise quartz movement powers the decorative football-shaped weights and swinging pendulum with the official Cowboys logo. Best of all, at the top of every hour, a traditional cuckoo bird wearing a Cowboys helmet pops out of the miniature doors at the top of the clock, while the sound of chirping fills the air. Don’t wait another moment to cheer on your Cowboys with this incredible cuckoo clock; the edition is limited to just 10,000 worldwide and strong demand is expected. Order now!