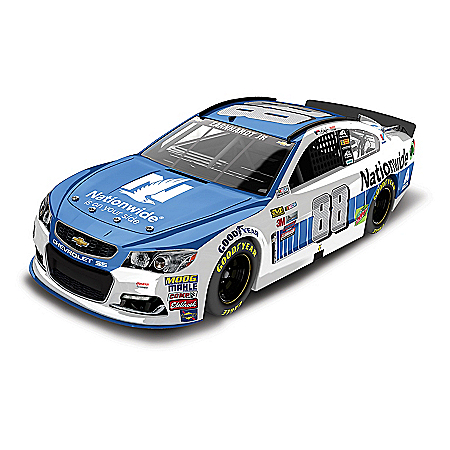 Since the day Hendrick Motorsports announced Dale Jr.’s official return to NASCAR® after being sidelined the latter half of 2016 season, loyal fans have anticipated the day they’d see the #88 Nationwide Chevy SS battle again for the checkered flag with Dale Jr. behind the wheel. Now that Dale Jr. has announced his retirement at the end of the 2017 season, fans will be racing to own this Dale Earnhardt Jr. No. 88 2017 Diecast Car Collection, precision-engineered by Lionel Racing in collector’s preferred 1:24 scale and available from Motorsport Editions™. Your diecast car collection begins with Issue One, Dale Earnhardt Jr. No. 88 Nationwide 2017 Diecast. Soon your collection will continue with Issue Two, Dale Earnhardt Jr. No. 88 Axalta 2017 Diecast, and additional Dale Jr. diecast cars, each a separate issue to follow.‡Each of these NASCAR diecast cars in the collection is crafted to the highest standards in diecast with over 180 individual parts with authentic details, from the hood pins and genuine sponsor logos and graphics, to the lower rear spoiler and genuine graphics on the rear deck lid. Some of the other exciting details include 2017 paint schemes for Nationwide and Axalta and more, a detailed interior; manufacturer-specific engine detail, detailed chassis, and more, complete these bold diecast racing cars. Plus, each collectible diecast car is imprinted with a special Diecast Identification Number – DIN™ – for registration, along with a silver sticker indicating production run size to maintain authenticity. This outstanding collection is a unique opportunity to own authentic diecast cars featuring each and every primary paint scheme from Dale Jr.’s last-ever season. Heavy demand is expected for these Dale Earnhardt Jr. collectible diecast cars, so don’t delay. Order now!