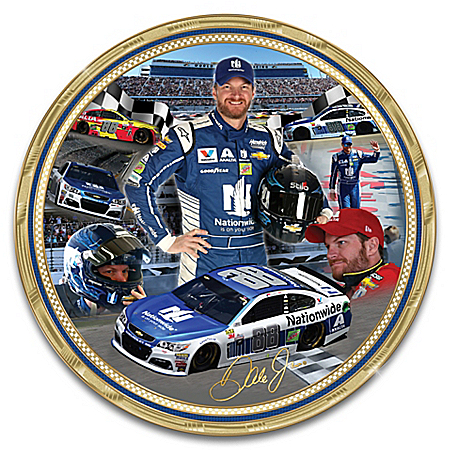 Dale Earnhardt Jr. is more than merely a master at the wheel – he is a NASCAR® legend who has earned hundreds of top finishes and won both the Daytona 500 and Talladega multiple times. With Dale Jr.’s 2017 retirement from stock-car racing, his thrilling career is now boldly commemorated on lustrous Heirloom Porcelain® in the Dale Earnhardt Jr. Collector Plate, exclusively from The Bradford Exchange. Featuring vivid imagery of Dale Jr. and his No. 88 Nationwide and Axalta cars, this officially-licensed retirement tribute is a must-have for loyal fans. In honor of No. 88, it is being offered in a strictly limited edition of 8,800 worldwide, so act quickly to bring it home.Measuring an impressive 12 inches in diameter, this distinctive, masterpiece collector plate showcases a photographic montage of some of this racing legendâ€™s winning moments on the track, with an image of the triumphant Pied Piper at the center. The thick outer border and Dale Jr.’s replica signature both glisten with genuine 22K gold, while the golden checkered rim recalls the flags that waved each time he crossed the finish line. This must-have Dale Earnhardt Jr. collectible arrives in a custom, satin-lined deluxe presentation case for handsome storage or gift-giving. Sure to be a fan-favorite, it’s expected to prompt intense demand. Don’t delay – order now!