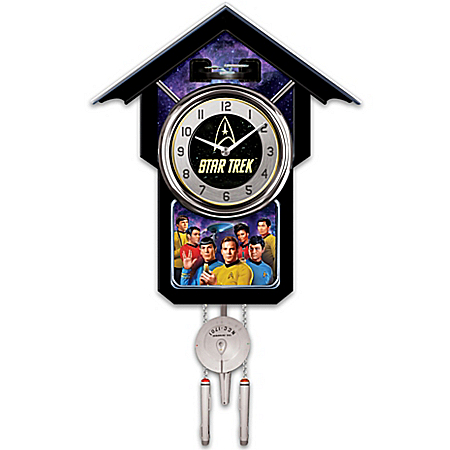 $199.95 With Captain Kirk in charge, you can beam aboard the Starship Enterprise™ every hour of the day with the first-ever STAR TREK™ Cuckoo Clock, a Bradford Exchange design exclusive in an edition limited to only 5,000 worldwide and officially licensed by CBS Studios Inc.! This nearly two feet high stunning tribute wall clock is the perfect way “to boldly go where no one has gone before™”! It even has sound and animation for added adventure.Expertly handcrafted, this wooden cuckoo clock face is protected by glass and adorned by the STAR TREK and Enterprise™ logos. Hand-painted finish and silvery detailing are inspired by the futuristic design of the Enterprise. A striking montage of the Original Series crew, including Mr. Spock and Dr. McCoy, commands attention on the clock body. Plus, every hour brings a new adventure as the Enterprise does a fly-by to the tune of the Original Series theme song. For the perfect finishing touch, the pendulum is designed to look like the Enterprise saucer while the weights resemble the nacelles. Strong demand is expected for this magnificent Starship Enterprise cuckoo clock. Order now!