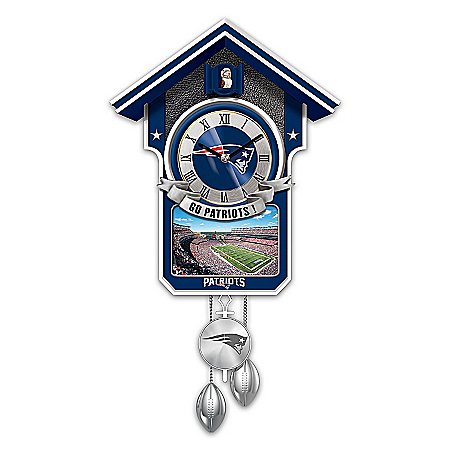 $199.95 With more Super Bowl appearances than any other NFL team in the past 25 years and winning season after winning season, the New England Patriots command the love of their fans and the respect of their competitors. Now, this New England Patriots Cuckoo Clock cheers on your Patriots every hour of the day. Officially licensed by NFL Properties and available only from The Bradford Exchange, this bold NFL cuckoo clock is a handcrafted touchdown all on its own, and certain to be a game day conversation piece.This New England Patriots Cuckoo Clock is bursting with game-day spirit brought to life by a handcrafted body enhanced with bold hand-painted red and blue details. Beneath the Patriots logo-enhanced face it boasts a vivid, full-color image of the Patriots’ iconic playing field highlighted by the team name. A precise quartz movement powers the decorative football-shaped weights and a swinging pendulum, also adorned with the official Patriots logo. Best of all, at the top of every hour, a traditional cuckoo bird wearing a Patriots helmet pops out of the miniature doors at the top of the clock, filling the air with chirping cheers for the team. But you must hurry; this incredible cuckoo clock is available in a limited edition of just 10,000 and you may have to tackle intense demand from fellow fans. Order now!