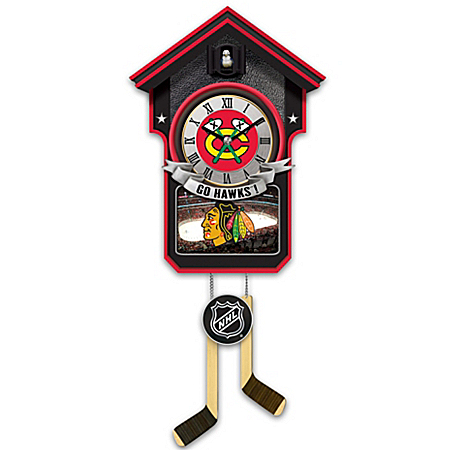 $199.95 In season or out of season, it’s always a good time to honor the legendary Chicago Blackhawks®! That’s why we’re pleased to introduce the Chicago Blackhawks® Cuckoo Clock, showing off your NHL® pride every hour, any hour, day and night. This striking Blackhawks® cuckoo clock features an accurate battery-operated quartz movement, which powers the NHL® logo pendulum, swinging between two sculpted “taped” hockey stick weights. A Bradford Exchange custom design officially licensed by the NHL®, it’s available in a strict limited edition of 10,000 worldwide.Careful individual handcrafting of this Chicago Blackhawks® Cuckoo Clock makes no two ever the same, plus it is hand-painted with the team’s trademark colors of red and black. Exciting full color imagery of the packed ice arena on game day and two Blackhawks® logos add to the thrill of this collectible wall clock. Then, on every hour, a traditional cuckoo bird, sporting a hockey helmet, pops out of the miniature doors at the top, accompanied by the sound of chirping. Strong demand is expected for this limited-edition Blackhawks cuckoo clock, so don’t wait another minute to celebrate this history-making NHL® team. Order now!