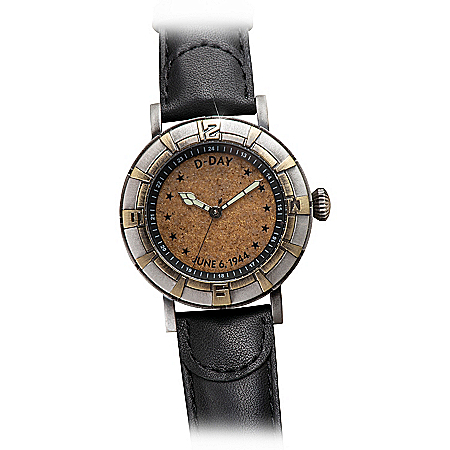 $199 The Genuine D-Day Artifact Men’s Watch Featuring Authentic Sand From Normandy Beach – On June 6th, 1944, at 0630 hours, the heavily fortified coastline of Occupied France in Normandy ignited with an event of unforgettable heroism, heartbreak and timeless courage: D-Day. Now, wear a piece of that historic moment in time with The Genuine D-Day Artifact Men’s Watch, a fine jewelry exclusive from The Bradford Exchange Mint. In remembrance of the 156,000 Allied troops, 5,000 ships and 13,000 aircraft that stormed the beaches that day, the dial of this extraordinary watch is enhanced with a genuine World War II artifact: a permanently adhered layer of authentic sand from Normandy Beach in France.Distinctive and functional, this heirloom-quality quartz watch is superbly handcrafted. Boasting a look inspired by timepieces of the era, it features a crystal with stars and the commemoration “D-Day June 6, 1944”. A 24-hour sub-dial indicates military time, while the bezel is plated in silver with antique bronze-plated numerals marking every third hour. The custom stainless steel case guards a precision quartz movement for dependable timekeeping, and the back is engraved with a U.S. flag and the words “Honoring America’s Finest D-Day 75th Anniversary”. An adjustable, genuine black leather band completes the effect. This important timepiece is an outstanding tribute to the 75th anniversary of D-Day that any American would be proud to wear, and it makes an unforgettable military gift as well. It even arrives in a deluxe wooden presentation box. But hurry, strong demand is expected – order now!