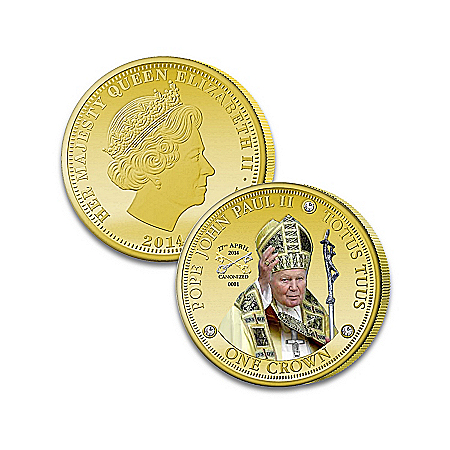 $49.95 On April 27, 2014, the most charismatic and beloved Pope of modern times, John Paul II is declared a saint, recognizing his tireless service and devotion to millions around the world. Now a Pope John Paul II commemorative coin collection lets you mark this important occasion and many others throughout the Holy Father’s rich history. We are pleased to announce The Pope John Paul II Coin Collection, exclusively from The Bradford Exchange Mint, beginning with Issue One, The Pope John Paul II Canonization Coin, a genuine legal-tender crown coin honoring his 2014 ascension to sainthood. Following your receipt of the John Paul II canonization coin, your collection will continue with Issue Two and additional commemorative coins to pay tribute to John Paul II’s prolific life, each a separate issue to follow.‡Each commemorative coin in this collection is graced with Pope John Paul II’s selfless motto “Totus Tuus” or “Totally Yours,” and richly layered with pure 24K gold and rhodium platinum accenting. One side of your inaugural John Paul II coin features a profile of Her Majesty the Queen, while the other side showcases a full-color Saint John Paul II in his papal vestments, along with his canonization date and 3 genuine white Swarovski? crystals, symbolizing the purity of his virtues and the Holy Trinity. Each of the new Gold Crown coins are also individually numbered. Future coins will showcase important events from his legacy, including his ordination as archbishop and cardinal, and a celebration of his two confirmed miracles. If you want to own The Pope John Paul II Coin and Medallion Collection you must act immediately, as it will only be available in a strict limited edition of 9,665 (9,665 for each day Pope John Paul II was pope). Strong demand is expected, so order now!