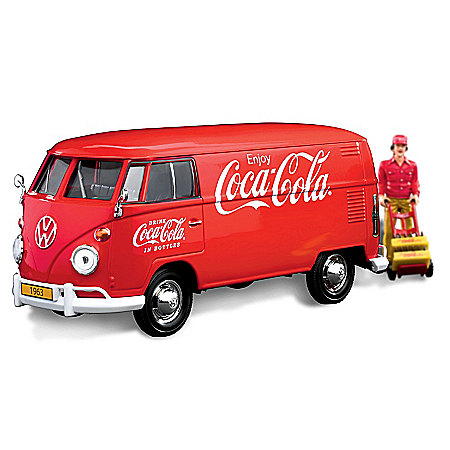 $59.98 On The Road With COCA-COLA 1963 Volkswagen Type 2 (T1) Diecast Cargo Van And Accessory Set – In 1963, soft drink fans were introduced to a cool new slogan from The Coca-Cola Company that “Things Go Better With COKE®”. The popular jingle and TV commercials that went with it created a buzz that sent demand through the roof. What better way to deliver that crisp, refreshing flavor than with your very own delivery man, hand-carting two cases of COCA-COLA® fresh out of a VW! Introducing the 1963 Volkswagen Type 2 Diecast Cargo Van and Accessory Set, an officially licensed first-ever presented by The Hamilton Collection.This rugged 1:24-scale diecast van is finely tooled with an opening rear door, detailed interior/exterior, rolling real rubber tires, and a hand-painted COCA-COLA red showroom finish with a VW emblem on the front and official logos emblazoned on the sides! Plus, it also includes a Delivery Driver figure with a rolling handcart and two cases of replica COCA-COLA bottles to complete the set! Strong demand is expected, so grab this COCA-COLA collectible set now before this special offer drives off – order now!