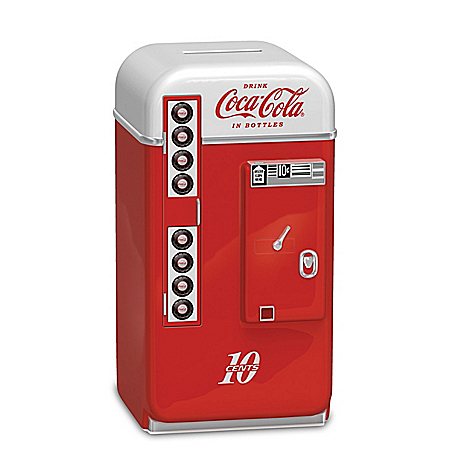 $89.98 COCA-COLA Vintage Vending Machine Design Inspired Coin Bank Featuring High-Gloss Paint & Metallic Finishes – Travel back in time to relive the magic of the 1950s! Americans began to travel more often, picking up a refreshing COCA-COLA from vending machines when they were on the go. Capture the nostalgic accessibility of those vintage vending machines from the ’50s and relive the romance from a simpler time with this classic bright red COCA-COLA Coin Bank, a limited-edition first ever available exclusively from The Hamilton Collection. Use the convenient coin slot to store all your excess change in a timeless, fun-filled piggy bank!Officially licensed by The Coca-Cola Company, every inch of this working coin bank is expertly handcrafted by Hamilton’s Master Artists to recreate the fantastic detailing of a retro vending machine – down to the vintage official 1950s COCA-COLA logo! Two-tone red and white era-authentic COCA-COLA graphics, high-gloss paint, and metallic finishes add to the charm of this vinyl piggy bank. In addition to the old-fashioned appearance and realistic decals, the added “window” shows a glimpse of multiple COKE “bottles” that will leave you thirsting for an ice-cold beverage. Genuine 1950s vending machines can be difficult to find; don’t miss this opportunity to “bank on” a new, highly sought-after COCA-COLA collectible! Order now!