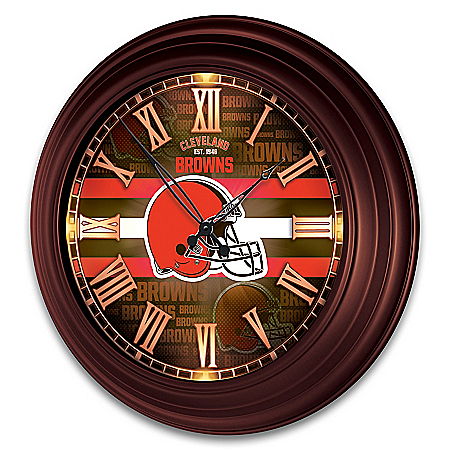 $145 Cleveland Browns NFL Outdoor Illuminated Atomic Wall Clock Featuring A Glass-Encased Face With Roman Numerals, Team Colors & Logos – The atomic clock is an all-time champion of timekeeping, offering both precision and accuracy to within a second – two of the most important things in the game of football. Now there’s a dynamic atomic clock designed specifically for followers of Cleveland football: the Cleveland Browns Wall Clock, a limited-edition timepiece available only from The Bradford Exchange. Officially licensed by NFL Properties LLC, this first-of-its-kind indoor/outdoor clock looks great wherever it’s displayed and is sure to elevate your NFL decor.A dramatic presentation at over one foot in diameter, this first-of-its-kind NFL clock boasts Cleveland’s official logos, colors and year of establishment against a smart field with the look of jersey texturing. Plus, it’s completely self-setting as it is in sync via radio waves with the official source of U.S. time in Fort Collins, Colorado. You won’t ever have to make adjustments, even during Daylight Saving Time. When darkness is detected by the built-in sensor, your Cleveland Browns clock automatically illuminates with hidden LED lights, causing the glass-encased face and Roman numerals to glow. And the wall clock’s dark, copper-toned metal housing is expertly crafted and weather resistant, making it ideal for outdoor display too. Strong demand is expected, so hurry. Order now!