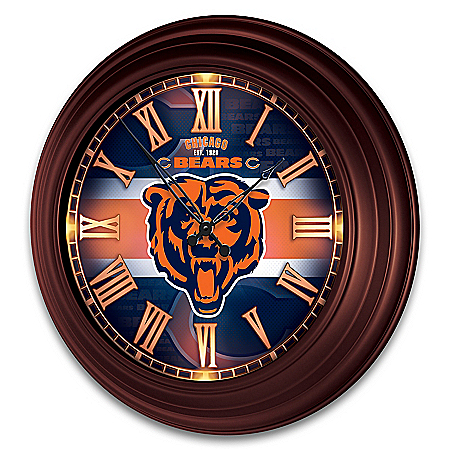 $145 Chicago Bears NFL Outdoor Illuminated Atomic Wall Clock With Glass-Encased Face, Roman Numerals, Team Colors & Logos – There’s only a few seconds left in the game, and Chicago football fans are on their feet and ready to celebrate a resounding victory. Now, you can showcase your pride on game day and all year long with the Chicago Bears Wall Clock, a first-ever limited-edition atomic clock officially licensed by NFL Properties and available only from The Bradford Exchange. Making an impressive presentation at over a foot in diameter, this thrilling atomic clock showcases the team’s official logos and colors against a smart field with the look of jersey texturing.Best of all, with this atomic clock, you can show off your love for Chicago football in your home or even outdoors, since the clock’s stylish housing is expertly crafted of copper-toned metal for weather resistance. The clock is also in sync via radio waves with the official source of U.S. time in Fort Collins, Colorado, so it is completely self-setting, even during Daylight Saving Time. Plus, the glass-encased face and Roman numerals automatically illuminate due to a built-in sensor that detects darkness and cues hidden energy-efficient LED lights. Strong demand is expected for this distinctive NFL decor, so don’t wait to score yours. Order now!