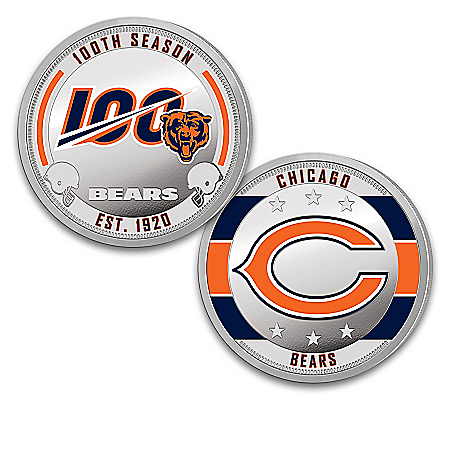 $49.95 The Chicago Bears 100th Anniversary 99.9% Silver-Plated NFL Proof Coin Collection – The Windy City’s NFL team is famously known as the “Monsters of the Midway.” But a century ago, in 1920, they began as the Decatur Staleys, in honor of their sponsor. Under the leadership of celebrated coach and owner George Halas, the team moved to Chicago in 1921, adopting their storied name. Now, exclusively from The Bradford Exchange Mint, The Chicago Bears 100th Anniversary Proof Coin Collection commemorates the thrills, challenges and glory of the team’s 100-season history. This must-have tribute collection begins with Issue One, The Chicago Bears 100th Anniversary. Next to arrive will be Issue Two, Akiem Hicks and FREE Display Box. Soon your collection will continue with Issue Three, Mitchell Trubisky, and additional collectible team Proof coins, each a separate issue to follow.‡Officially licensed by NFL Properties LLC and National Football League Players, Inc., each of the commemorative Proof coins in this collection is richly plated in gleaming 99.9% silver for enduring beauty. The fronts of these NFL collectible coins showcase the team’s official logos and colors, while the back of your first coin bears the 100 logo that unites a football’s powerful trajectory with the iconic face of a bear in team colors, along with the year the team was established. Subsequent coins in your collection will feature portraits of favorite players. Individual crystal-clear capsules keep each of your coins safe, while the handsome museum-quality display box provides the perfect way to show off your entire 100th anniversary collection. Intense demand is expected for this handsome NFL Proof coin tribute, so don’t miss out. Order now!