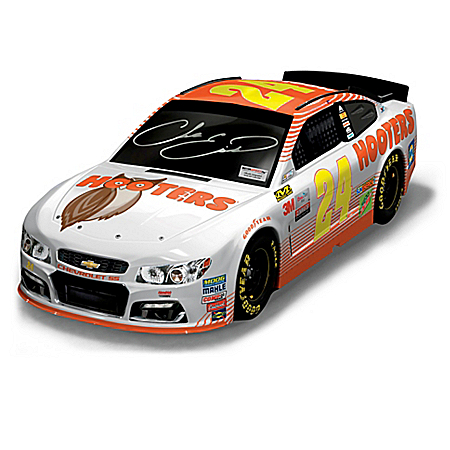 $199.95 Chase Elliott Autographed 2017 NASCAR Hooters 1:18-Scale Chevrolet SS Sculpture – A young rising star in NASCAR®, Chase Elliott has what it takes to win! Now, you can celebrate all the thrill he brings to the racetrack with the first-ever Chase Elliott Autographed 2017 Hooters Chevy SS Sculpture, limited to only 150 sculptures worldwide and available only from Motorsport Editions™. This Chase Elliott collectible is crafted in sleek cast resin to 1:18-scale to replicate every detail of his Chevy SS ride and officially licensed by Hendrick Motorsports and NASCAR.Emblazoned with Chase’s 2017 Hooters paint scheme – his last season driving the #24 – the sculpture boasts a rear spoiler, Goodyear Eagle tires, Chevy emblems, official sponsor logos and a gleaming finish. Most incredible of all is the windshield that’s personally autographed by Chase Elliott! An official sticker on the windshield and a numbered Certificate of Authenticity further attest to Chase’s signature and your sculpture’s status within the edition. Strong demand is expected for this officially autographed car sculpture. And with a strict edition limit of 150 sculptures worldwide, you’re strongly urged not to wait – order now!