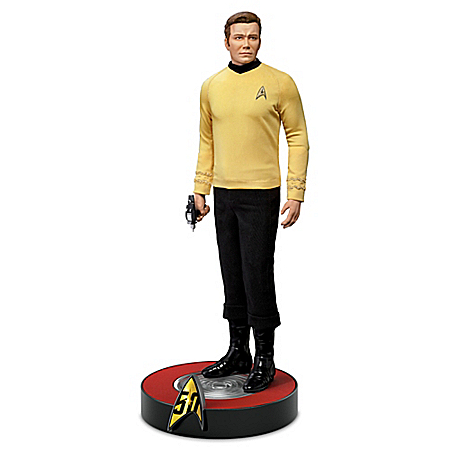 $99.99 For 50 years, he’s boldly led us on an unforgettable journey. And ever since he made his first log entry – after beaming down to one of many mysterious planets – Captain James T. Kirk and the legendary TV show STAR TREK™ have inspired a fleet of additional TV shows, animated cartoons, books, comics and movies. Now, we are proud to celebrate 50 years of this groundbreaking show with this Captain Kirk STAR TREK 50th Anniversary Figure, exclusively from The Ashton-Drake Galleries. This officially licensed Collector’s Edition STAR TREK anniversary figure is fully sculpted, handcrafted in fine artist’s resin, and carefully hand-painted to highlight its amazing likeness to actor William Shatner when he played the confident young captain, from his square-jawed good looks to his self-assured stance – ready for anything the universe serves up. With a phaser in one hand and poseable arms, this Captain Kirk figure enables you to recreate all kinds of famous scenes from the show.Standing a commanding 19-1/2 inches tall, Kirk is dressed in his original Starfleet uniform with fabric gold tunic – complete with Starfleet logo and rank braid – and cuffed black pants over sculpted black boots. The captain looks just like we remember him, waiting for Scotty to beam him down to his next adventure. Best of all, at the push of a button, the transporter-shaped base actually illuminates and plays the familiar transporter sound! A three dimensional50th Anniversary logo on the transporter base adds the perfect finishing touch to this STAR TREK doll anniversary tribute. Given the ongoing popularity of STAR TREK and the commemoration of the original series, we expect strong demand for this illuminating tribute. So, don’t delay and risk disappointment; order now!