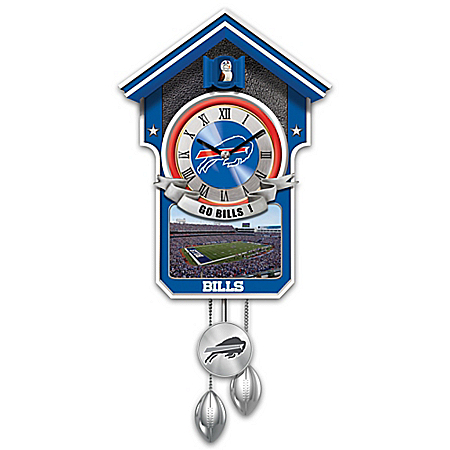 The Buffalo Bills have a long and incredibly rich history. As one of the original franchises formed in 1960, the team has won 4 consecutive conference championships and played 4 consecutive Super Bowl games. It’s no wonder that fans still go wild for the Buffalo Bills. Now, you will fall even more in love with the Buffalo Bills with the Buffalo Bills Cuckoo Clock. Officially licensed by NFL Properties LLC and available only from The Bradford Exchange, this stunning NFL cuckoo clock will give you Bills fever.Perfect for any Buffalo Bills football fan, this decorative wall clock boasts a richly detailed handcrafted body, hand-painted with classic Buffalo Bills royal blue, red and white colors. A beautiful, full-color image proudly displays the Bills’ playing field on game day, highlighted by the team name just below. A precise quartz movement powers the swinging pendulum with the official Bills logo: a pair of decorative football-shaped weights add yet another winning detail. For the perfect finishing touch, a traditional chirping cuckoo bird wearing a Bills helmet bursts out of the miniature doors at the top of the clock, accompanied by the sound of a roaring crowd. Don’t wait to cheer on your Buffalo Bills with this fantastic cuckoo clock; the edition is limited to just 10,000 worldwide and heavy demand is anticipated. Order now!