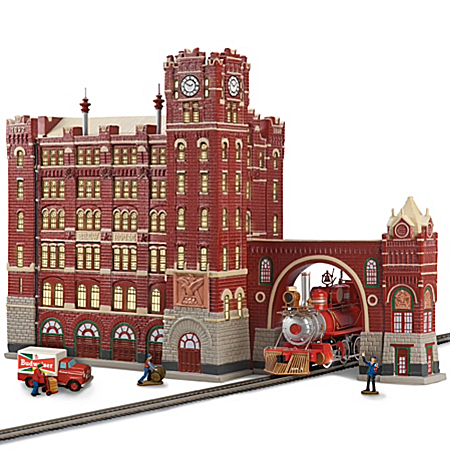 $149.95 Illuminated Village: Budweiser Brew House Masterpiece Edition Sculpture – Here’s to a spectacular way to add a piece of history to your train layout. Introducing a first-ever collectible recreation of the brew house officially licensed by Anheuser-Busch. This is the very same iconic Budweiser® Brew House that has graced the St. Louis skyline since 1892, now available as a limited-edition Masterpiece Edition sculpture, available exclusively from The Bradford Exchange, Hawthorne Village Division.Faithfully sculpted and hand-painted with artistry and detailing, it captures the look of this historic building down to the smallest brick. It is impressively sized at nearly a foot tall and nearly a foot and a half long. The main Brew House building illuminates, bringing a nostalgic glow to the 128 windows. The clock tower features four sculpted clocks, while trains up to On30 gauge can roar through the archway on the side of the building. Imagine how thrilling it will be to add this incredible Budweiser Brew House to your train display, but you must hurry. Intense demand is expected, and it is available in a limited edition of only 2,012 worldwide. Order now!