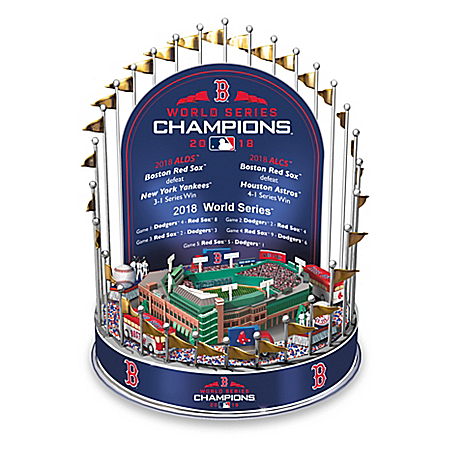 $199.96 The legendary Boston Red Sox™ are now the 2018 MLB™ World Series Champions™, so cheer on your favorite team in the victory parade of the year! Show off your Boston pride when you bring home this 2018 World Series Champions musical carousel, officially licensed by Major League Baseball™. This heirloom-quality baseball collectible is available from The Bradford Exchange in a strict limited edition of only 2,018 worldwide. Watch this impressive tribute come to life with vivid lights, music and motion.Masterfully handcrafted and painted by hand to showcase each dynamic detail, this Boston Red Sox memorabilia boasts a sculptural stadium showpiece surrounded by 24 metal pennant flags, inspired by the coveted Commissioner’s Trophy™. Towering above the stadium is a backdrop that highlights the scores from each World Series™ game against the Los Angeles Dodgers™, along with the official team and championship logos. Then with the flick of a switch, the carousel illuminates from within and plays the lively melody of “Take Me Out to the Ballgame,” as a victory parade circles the stadium. If you are a loyal member of the Red Sox Nation, you don’t want to miss this 2018 World Series Champions collectible and highly-sought after Sox fan gift, so hurry and order now!