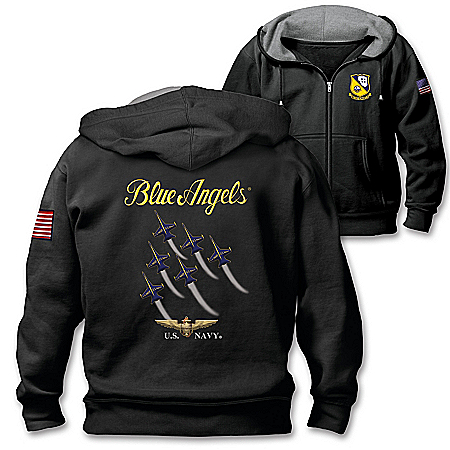 $99.95 Blue Angels Men’s Black Full-Zip Hoodie Featuring Patriotic Imagery Of U.S. Navy Jets On The Back & An Embroidered American Flag Patch On The Sleeve – The Blue Angels® flight demonstration squadron was formed in 1946 by the United States Navy®. The unit is the second oldest formal aerobatic team in the world. Performing aerial displays throughout the United States, as of 2020, the team has flown for more than 505 million spectators at schools, hospitals, and community functions since their inaugural 1946 season. Now you can show your support of the “Blues” every time you wear the Blue Angels Men’s Hoodie, a custom design available exclusively from The Bradford Exchange. Officially licensed, this full-zip hoodie is the perfect way to honor the Blue Angels while wearing comfy, casual style!Crafted in a black easy-care, cotton-blend knit, this patriotic clothing design showcases imagery of soaring planes with the Blue Angels symbol and the embroidered words “Blue Angels®” and “U.S. NAVY®”. Adding to the look is a fully embroidered American flag patch on the left sleeve. The front displays an appliqué patch with embroidered details of the Blue Angels symbol and name. There are plenty of custom details throughout this patriotic clothing design, like a comfortable brushed fleece interior and a gray thermal knit-lined hood, generous kangaroo front pockets, knit cuffs and hem, a full front zipper, and silver-toned metal tippets on the hood drawstrings. Strong demand is expected for this custom-designed hoodie, so order now!