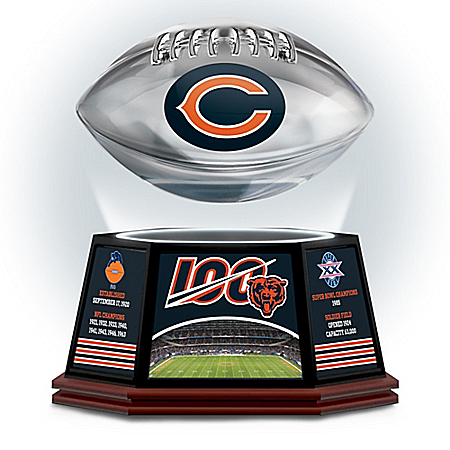 $199.99 Chicago Bears 100th Season NFL Commemorative Levitating Football Sculpture – Established in 1920, the Chicago Bears have thrilled fans with 100 amazing seasons, thousands of memorable plays and the all-time record for most regular season wins. Now, that century of gridiron greatness inspires the Chicago Bears 100th Season Levitating Football Sculpture, only from The Bradford Exchange. This innovative NFL collectible is a dramatic, eye-catching way to recreate the excitement of game day, using hidden electro magnets to make a silvery football hover and spin in mid air!Officially licensed by NFL Properties LLC, this commemorative levitating football is expertly crafted with a glistening silvery finish and logo. Suspended above a handsome base, showcasing the team colors, logos, championships and Soldier Field stats, the levitating football creates an even more impressive presentation with the flip of a switch, as dramatic white lights shine up from the base. For fans, this is a captivating way to champion a legacy of greatness, but you must get off the sidelines now! This innovative NFL memorabilia is available in a limited edition of only 10,000, so hurry and order now!