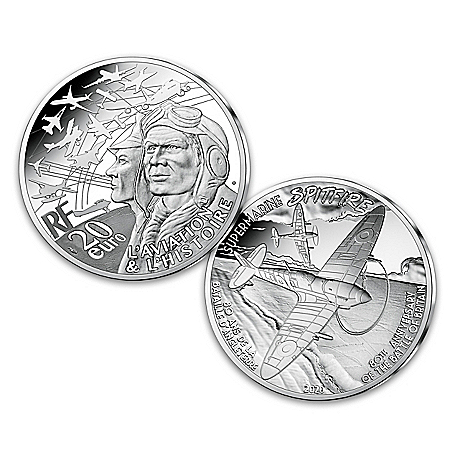 $309.99 The 80th Anniversary Battle Of Britain 44.4 Grams Of 90% Fine Silver Piedfort Coin Boldly Portrays 2 British Supermarine Spitfires & Pilots – For coin collectors, a “first” is truly something special. But when it’s an unprecedented, first-ever from the renowned Monnaie de Paris, the official Mint of France, interest can go sky-high! That’s why we are so pleased to announce that the Monnaie de Paris has created a limited-edition commemorative, The 80th Anniversary Battle of Britain Silver Piedfort Coin, available exclusively from The Bradford Exchange Mint. Struck in a special specification of 44.4 grams of 90% silver, this treasure marks the 80th anniversary of the historic Battle of Britain. This pivotal event was Great Britain’s iconic battle where the bold airmen of the RAF (Royal Air Force) scrambled into their Supermarine Spitfires and Hurricanes and defended Britain in dramatic dogfights and heart-pounding sorties. Now their courage shines in the enduring splendor of this heavyweight silver coin struck by the world’s oldest continuously-running Mint. On the obverse side, this magnificent coin showcases Britain’s valiant defenders and their soaring Supermarine Spitfires in action over the English Channel. The words “80th Anniversary of the Battle of Britain” appear in both French and English. The reverse salutes pilots and aircraft through history and states this legal tender coin’s face value of 20 Euros. With its unique specification, this stunning coin merits the prestigious designation of Piedfort, or heavy weight in French, indicating that it is double the weight of a traditional strike. Due to its meticulous minting, availability is limited to only 1,500 coins worldwide and each one is individually numbered on the edge. Plus, each coin collectible arrives in its original Monnaie de Paris display case. It’s a rare addition to your own collection and makes a coveted gift for coin collectors and history buffs, but strong demand is expected, so don’t